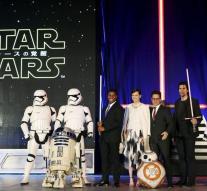 - A cinema in the US Freehold Township, New Jersey, was evacuated Friday after a bomb threat was received. In connection therewith, a man arrested.

He had left a note in the men's toilets, with the text I'm out for blood. At 16. 00 a bomb, at 18. 00 I shoot my empty warehouse on visitors . In the cinema the new Star Wars film was shown. Which was demolished halfway, after which the building was evacuated.

In the cinema no bomb was found.