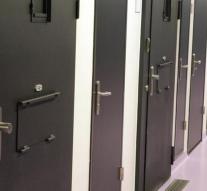 - In a prison in Belgium on Tuesday night a man stabbed to death by his cellmate. He was put to death with a plastic insert weapon.

The victim stayed at the psychiatric ward of the prison in the Walloon Lantin and was found dead around 21. 25 pm when his medication was adjusted. Despite the guards strike both parties were treated by a psychiatrist, Prisons says.

The cellmate interrogated. The Public Prosecutor in Liege has launched an investigation.