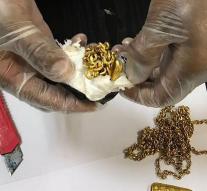 colombo - A 45-year-old man from Sri Lanka walked against the lamp at Colombo airport after suspected himself in the departures hall. Further investigation showed that there was a kilo of gold in his rectum.

'The gold was packed in four plastic bags found in his rectum,' said Sunil Jayarathne, spokesman for Customs. 'However, such smuggling methods are not new. '

The gold is worth about 25,000 euros. The detained man was released after paying a deposit.