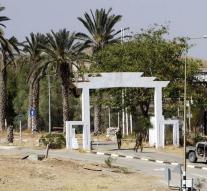 ramallah - Three Israelis when a Palestinian were wounded Monday opened fire on an army checkpoint near Ramallah on the West Bank. The gunman was shot dead according to Israeli media site.

The Palestinian was reportedly armed with a Kalashnikov automatic rifle. He managed to wound two soldiers lightly. A third victim, there is, according to the Jerusalem Post worse.