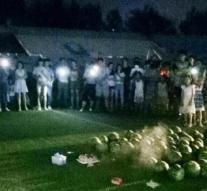 zhengzhou - A Chinese has used 99 watermelons and a cake to recover his ex-girlfriend. The Henan Technical University student in Zhengzhou placed the watermelons on a sports field on Monday and then called his ex. However, it did not show up.

The watermelons attracted a lot of attention, according to Chinese media. After ten minutes, the security of the university appeared to keep the spectators in control. When a friend shouted, 'Take the melons', the crowd flew on the melons.

Photos of the special event were widely shared on social media. Why the student thought he could seduce his ex with 99 watermelons is not clear.