Home / World / Man picked up after bomb at airport 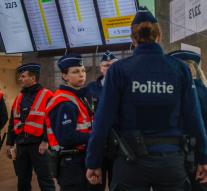 brussels - At Brussels Airport a man was arrested on Saturday morning when he boarded a plane of Ryanair with Madrid's destination 'calling for bombs he had', according to a spokesman for the Halle-Vilvoorde parquet.

The pilot immediately evacuated and searched the device, but nothing was found to be suspicious. Eventually, the plane could leave with about two hours delay.

The detainee is a 51 man from Wallonia. He was part of a larger group and presumably took a stupidity under the influence of alcohol. 'However, the authorities take the matter high:' This is a threat with an attack ', even though there are no indications that he was actually planning.