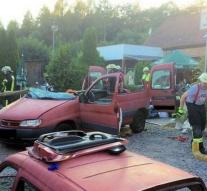 kaiserslautern - An obese man who had become trapped after a duitje is cut from his car by firefighters. The fire in Kaiserslautern saw no other way to liberate a 250 kilo man.

The man was slumped in his sleep in the passenger seat and was determined to get stuck with his legs under the seat. He could not get out of his Citroën on his own.

Due to the warm weather and the rapidly rising temperature in the car decided to fire than just cut open the roof of the car to free the man as soon as possible.


After the man was freed finally a rescue operation of about four hours. He is admitted to the hospital.

Unfortunately for the man he must also looking for a new car, because it is not by saving more rescue.