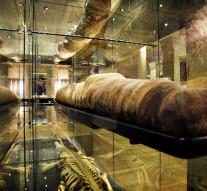 moscow - A man in the southern Russian city yessentuki three years of his dead mother kept house while he covered her body with salt to prevent decomposition.

The sexagenarian man said he did not bury his mother because he loved her and could not say goodbye, police reported Monday. The Russian also benefited from the unnoticed death of his beloved mother, for the meantime, her pension money was just paid.

Oddly enough, the woman is not the only mummy that was found. Saturday, police found a mummified body in an attic in St. Petersburg. That woman was 1.60 meters tall and wore woolen socks, slippers and a blue jacket.

In 2011, at the home of a man in Nizhny Novgorod found the mummies of 29 people. The man had them dug up in a cemetery and colored them in brightly colored women's clothing. He was nicknamed " the doll maker.