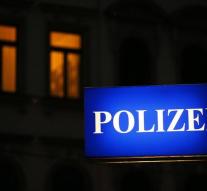 graz - A 39-year-old Austrian has over six weeks with the corpse of his girlfriend lived at his home in the city of Graz. Austrian media reported Thursday that the man's 44-year-old girlfriend was murdered during a quarrel clouded by drugs.

He had the body and then wrapped in a panic in foil and hidden in the bathroom. The case came to light when the daughter of the woman at the police pulled the bell because her mother for a long time could not could achieve more.

The murder could have been committed mid-September. The man was beaten Monday in chains.