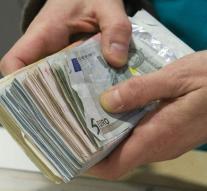 cham - A 54-year-old German from Cham visiting its large number of prostitutes paid with counterfeit money. To pay for his needs, he produced himself counterfeit euro notes. That he paid at least a hundred times to women in and around the city of Regensburg.

It went wrong when he once had a husband counterfeit money, which thus then wanted to pay his bill at a gas station. The cashier at the gas station discovered the forgery and did return. The trail led straight to the counterfeiter in Cham.