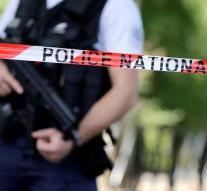 paris - A man killed his mother and sister in Trappes, a suburb of Paris. A third person was seriously injured. The police later killed the alleged perpetrator. According to Minister Gérard Collomb (Home Affairs), it is a 36-year-old man with serious mental health problems.

The attacker made his victims on the street and in a home. The seriously injured third victim was not a man's family. He was shot when he came out later and ran towards the police. The man also shouted 'Allah akbar' according to sources of French media (God is great). The authorities have not yet confirmed that.

Terrorist group Islamic State has claimed the attack, without providing evidence for that claim. Collomb stated that the perpetrator was known by the authorities because he would have praised terrorism. Still, according to the minister, it is more a confused person than someone who would respond to calls from groups like IS.

France has been repeatedly shaken by bloody terror attacks in recent years. In 2016, for example, more than eighty people died as a result of an attack with a truck in Nice. A year earlier, 130 people were killed by a wave of attacks in Paris, where terrorists attacked Bataclan concert hall.

About 30,000 people live in Trappes, a municipality in the Yvelines department. In recent years, many young people have left the city for Syria.