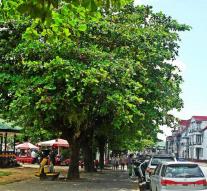 lely city - A 35-year-old man from Almere is accused of killing his girlfriend during their vacation in Suriname. The woman drowned in the Suriname River and possibly landed by the suspect in the water. The Public Prosecutor's Office (OM) wants to prosecute him for murder or killing the woman, so it will be announced on Tuesday.

At the end of June 2015, the man declared the 29-year-old woman, also from Almere, missing. After a search, she was found three days later in the river. Initially the police went out of a drowning accident, but one month later, information came up that was more obvious before the woman died.

At the request of the husband, the woman concluded short-term insurance and funeral insurance shortly before her, appointing the man as a beneficiary. After her death, he tried to collect insurance money. He would also have falsified an employer's statement. The OM therefore denies him from attempting scams and falsity in writing.

The man was detained last May and has been stuck since. On July 19th, there is a meeting in Lelystad.