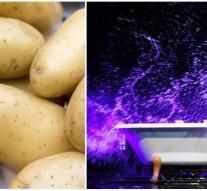 eastleigh - Few hotel guests walk in with a bag of potatoes. The 30-year-old James Johnson did it, not to mention wearing a bra. When the surprised staff pulled the police, it turned out that the Englishman was about to take a potato bath.

Agents found out that he was in the middle of a day-long 'drug binge': a period of extreme drug intake for a long time. Hotel staff smelled of cannabis air before, while XTC, a kind of MDMA and psychedelic drugs were found in the hotel room.

Because the man then filled a bath with potatoes, in a totally dazed state, a 'bad trip' may be mentioned. In the courtroom Johnson described that it 'felt like it was the right choice,' writes the Daily Echo.

Johnson would go out one night in Eastleigh, close to Southampton, with friends and use drugs. That eventually became five days. Large quantities of drugs were also found in his house, which gave agents the suspicion that they were dealing with drugs.

Eventually, Johnson admitted he was acting in the drugs: he had bought this charge for $ 750 on the darkweb. He does not seem very successful. An expert from the police calculated that he was scammed and that the cargo is not even worth half.

Johnson has to carry out community service sentences for the next year and a half and will also undergo a nine-month withdrawal treatment.