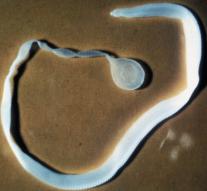 london - A Colombian man is deceased after he got cancer of dwarf tapeworms in his body that had the disease.

The cancerous tapeworms living in the 41- year-old man because his immune system was weakened by HIV. It is the first time that it becomes known that a person develops cancer, which he got from a parasite.

The US Center for Disease Control and British natural history museum investigated the case and published about it in the New England Journal of Medicine.

The tumors of the man, who died in 2013, were of normal size and were found in his lungs and liver. Investigation revealed that the diseased cells were only a tenth of the size of normal human cells. The cells were found to contain a large amount of tapeworm- DNA, the BBC message Thursday.

That finding, the patient was not allowed to avail. He died three days after the tapeworm DNA was identified.