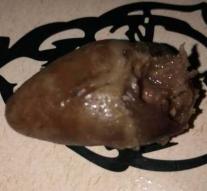 melbourne - It's Friday again, so you might want to get a greasy bite after a drink at work. A visitor to the KFC in Australia probably should not think about it anymore. He found a breaded and slimy chicken heart between his crispy chicken pieces.

21-year-old Timothy bought an Original Tenders Box last week at a KFC in Melbourne. In it he found the raw organ. 'The piece was breaded in the box. When the breading layer was released, something black appeared, 'says Timothy to the Australian Daily Mail. At that moment he had no idea which unpleasant surprise awaited him.

After Timothy realized that the black case was an organ, he decided to get a story at the fast food chain. On Facebook he posted: 'Uhh KFC can you explain to me why in god's name I see something similar to a chicken heart in my meal. '