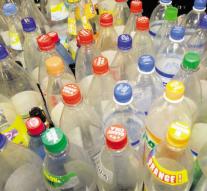 cologne - With a magnetic sensor and a wooden tunnel knew a 37-year-old man a reverse vending machine so to build that he is about 45,000 euros with 'deserved'. With his hack he prevented his bottle, 25 cents deposit was swallowed, so he could stop again and again in the same dispenser bottle. 177 451 times to be exact.

Reported that the Kölner Stadt-Anzeiger. Manipulating the machine cost him 5 000, but the trick earned him eventually about 45 000 euros.

The man was a decent time take its course, but by an anonymous tip it was clear that he had bottle-fed things.

Actually he wanted to earn his living from a liquor store. However, when things were so bad that came out the bottom of his wallet in sight, he decided to look for it in the empty bottles. He put the device in his basement. A very nice way to get money was not. 'So you have all day done nothing but getting that bottle to do in the machine,' the judge said. 'I have put a radio in addition to, otherwise it would be boring,' so lamented the accused.

The man this week was sentenced to a suspended sentence of ten months.