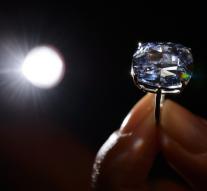 - The spectacular Blue Diamond Wednesday in Geneva has been auctioned for a record amount of 48.6 million Swiss francs (45 million euros), is present to a seven- year-old girl. The buyer shows a wealthy businessman from Hong Kong, Joseph Lau, who renamed the diamond prompt to Josephine, the name of his daughter.

The 64-year-old Lau has an estimated fortune of 9.1 billion euros, which he earned mainly in the nineties through hostile takeovers.

Tuesday he bought at a previous auction in Geneva in a ring with a pink diamond of approximately 26.6 million euros. Although he operated as an anonymous buyer, Hong Kong media managed to overtake him when the two stones were renamed " Blue Moon of Josephine ' and ' Dear Josephine.

Lau is a well-known collector of art and jewelery. He has a portrait that Andy Warhol made of Mao (16 million) and the fabric Te Poipoi of Paul Gauguin, which he a sloppy 36.5 million counted down. He also has a wine collection of approximately 10 000 bottles and a private Boeing 787 Dreamliner.