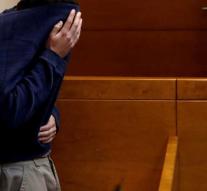 tel aviv - An Israeli-American man who caused chaos worldwide with thousands of bomb threats was sentenced to 10 years in prison in Israel. Due to the threats of the 20-year-old 'M.', aircraft had to make emergency landings and buildings were evacuated, news site Times of Israel reported.

The man admitted that he did about 2000 bomb threats at schools, hospitals, airlines and Jewish institutions. He said that in his own words out of boredom. M. has an autistic disorder and a brain tumor. That affects his behavior, his lawyers say.