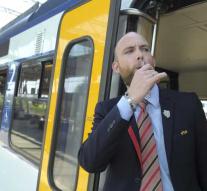 dusseldorf - A 48-year-old German demands 25,000 euros from the German railways because his hearing would be damaged by the conductor's flute. That happened shortly after he had stepped into the regional train between Düsseldorf and Cologne last July.

It was urgent to blow on the platform at that moment, and the conductor had to keep the doors open for the passengers to enter. At the moment that he blew his whistle, the conductor stood close to the plaintiff.

Because the flute sounded less than 10 centimeters from his left ear, he suffered irreparable damage, the man argues. As if a fire at my ear exploded, he stated in German media. The man has been wearing a hearing aid ever since.

The court still has to deal with the claim.