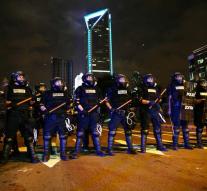 charlotte - A man who was shot during a demonstration against police brutality in Charlotte (North Carolina), is deceased at the hospital. The 26-year-old Justin Carr was reportedly shot in the head, the Charlotte Observer reported.

It is according to the local newspaper still unclear who is responsible for the shooting. Police would not say whether a suspect is in focus. The municipality Charlotte had previously know that the fatal shot in any case is not released by the police.

A native of Charlotte explained to Reuters that Carr stood for him when he was hit. ' I thought at first it was not fatal, because the police was shooting with rubber bullets, \'said the witness.

Bystanders would the victim have left a few minutes on the ground before they turned back to him. There appeared to be blood coming from his head.