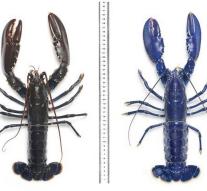 portsmouth - A unique catch in the US state of New Hampshire. Fisherman Greg Ward could not believe his eyes when he caught a blue lobster on his catch.

The fisherman initially thought that it was an albino lobster, but soon found it to be a 'hard-shell blue lobster'. This is the first time he shows such a copy in the 32 years that he fished for lobsters. It is therefore a chance of 1 to one million.

Ward has transferred the lobster to a scientific institute. The institute makes a comment as blue lobsters are very rare. 'Every summer we get about five or six bubbles, with the news that there is an albino lobster between the catches of fishermen. '