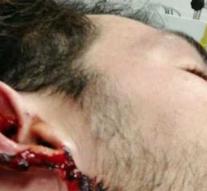 aalst - Nick Blanckaert (29) wanted to enjoy a techno party this weekend, but instead he was maltreated by two men, one of whom was biting his ear. 'Suddenly I felt his teeth. You heard the cartilage crack. '

After the party at the Belgian Hertshage, Blackaert walked home, but two men followed him. 'I asked what they were planning. The quarrel started with one of them. The other, an African type, kept aloof. The first said that I had insulted his friend, whom he called 'my brother,' by making racist statements. I laughed and joked with him, but not with him. So that was not right. Then the African young man, apparently a promising rapper, told the other boy that they were wrong, 'Blackaert told Het Nieuwsblad.

Yet the first, and the 'most aggressive' according to Hertshage, went on. 'I did not let myself play with me and was on top of him at a certain moment', says the Belgian. 'If I had wanted to, I could also have dealt a few punches. But I did not, and the second pulled me aside. '

Blanckaert asks the men to leave him alone. That does not happen. A second push and pull party arises. 'Until I suddenly felt teeth in my ear. I heard the cartilage crack. And the blood was dripping on my shoulder. Not normal. When that guest saw what he had done, they let me go. '

Blackaert could be helped in the hospital. 'But they immediately said that I lost part of my left ear permanently. Maybe it can still be solved with plastic surgery ', the man laments. Unbelievable, he still finds it. 'I went on a world trip for fourteen months and lived in Australia and Asia. I came into contact with all cultures. And nothing has ever happened. Now I am back in Aalst a month and this happens. '