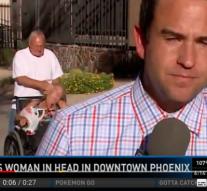 - TV viewers did not know what they saw when they watched this week unsuspectingly a broadcast of a local station in the American Phoenix. While a reporter for the court spoke, a woman was beaten in a wheelchair by a man in the face in the background.

Many people saw the live event and did complained to the TV station KPNX and the police. Agents soon found out that it was the 60-year-old Randall Burgess and his wife. The couple was taken in for questioning, but was so under the influence of alcohol and drugs that the police had no clear idea of ​​the cause.

'I get your still,' Burgess still shouted to his wife when he was beaten in chains. An officer pointed him delicately on the reason for his arrest. 'They did not call us. You announced live on television from a blow. '