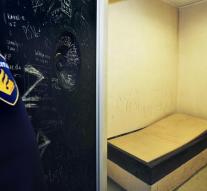 biezenmortel - A 55-year-old man from the Brabant village of Biezenmortel was arrested on Friday night. He had threatened to throw away the entire computer system of the police through emergency number 112 if his son would not release.

The man has been arrested for 'imprisonment', an offense which implies compulsion of an official to do something (or to leave) by violence or threatening violence.

The man's son is stuck because he had a fine of 1500 euros left open. That was revealed on Friday in a company in Wijk and Aalburg, where the son works.