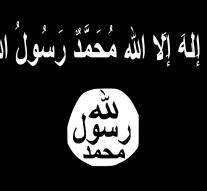 - In the Russian St. Petersburg Friday a man arrested for wearing a T-shirt bearing the logo of the Islamic State (IS), writes The Moscow Times . Wearing the T-shirt took him five days in jail.

The man of 27, who hails from Tajikistan, was arrested in a market in the district Fruzensky where he works as a cook. A federal court in the city put him to five days in jail for public dissemination of " forbidden symbols ".

In prison, would be the man with his teeth have scratched the text of the T-shirt, because he had no other clothes with him.