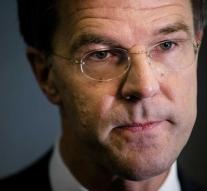 zwolle - Police in Zwolle Wednesday just before the Thorbecke Reading a mentally challenged man held the Prime Minister Mark Rutte wanted to give a hand.

The man was arrested because he was acting suspiciously, reports De Stentor. Moreover, he resisted arrest. The man, known to the police, ultimately had no mischief. He was transferred to his care organization.