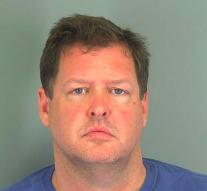 woodruff - An American 30-year-old woman would have held for months, has confessed that he had killed several people. The man showed where two bodies were buried according to police around his farm in Woodruff (South Carolina).

Police arrested suspect Todd Kohlhepp after the woman was rescued from a storage building on his property. The chained victim would have been detained for two months.

The woman told police after her rescue she had seen Kohlhepp shot and killed her boyfriend. She also said that other victims' bodies were buried around the farm of her abductor. The remains of the partner of the woman were all found Friday.

Kohlhepp recognized after his arrest that he among other things is responsible for a thirteen year old massacre in Chesnee. There were four people in 2003, shot in a motorcycle shop.

According to US media was Kohlhepp two years vacant for the shooting. He had fifteen years in jail for the rape of a fourteen year old girl.

The 45-year-old suspect was Thursday after the discovery of the woman again beaten in chains. According to officials knew the two together even before the kidnapping.