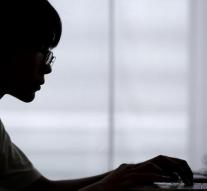 - A Syrian admitted that he hacked into computers for the Syrian Electronic Army. He wanted to hunt down opponents of President Bashar al-Assad. Peter Romar (37) people would have extorted.

Romar is on trial in the United States. He can get up to five years in prison. He hears next month what his punishment. Romar lived in Germany. He was arrested and extradited to the US in May

Two accomplices, Firas DARDAR, aka The Shadow, and Ahmad Agha Umar, aka The Pro are still on the run.