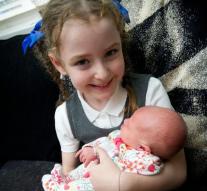 manchester - A 63-year-old man has been arrested in England because he had beaten a baby five days in a supermarket. The man would have confused the victim with a doll.

The little Elsie Rose was first out on stage with her father and mother and 7-year-old sister; the proud parents had taken their youngest daughter to show to friends.

In a branch of Tesco the baby suddenly got a fist of the man on her head. The 27-year-old mother tells British media that the family was afraid that the man had been beaten to death her daughter. 'My daughter screamed and thought her sister was no longer alive. '


The woman spoke to the man about his behavior, but the Briton initially denied that he had done something to the baby. 'I was hysterical and asked what got into him. Then he apologized and he said, 'Sorry, I thought it was a doll. ''

The child was taken to hospital and kept under surveillance overnight but proved otherwise not seriously injured. The man was arrested and is stuck for questioning.