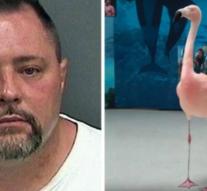 tampa - The popular Flamingo 'Pinky', the biggest attraction in a zoo in the US Tampa, by a cruel visitor to their deaths. The flamingo, very popular for its dances, was thrown on the concrete by a visitor to the park. Veterinarians animals were later put to sleep. What the man possessed is still completely unclear.

The beast was slain by the 45-year-old Joseph Anthony Corrao from Orlando, US police said. He stepped over a fence, lifted the 19-year-old bird and threw it hard against the ground. Corrao was arrested, as later in the day to leave the police station after he had paid a deposit of $ 2,000. About his enigmatic motif, the police did not disclose. A photo of the man is in virtually every major American media.

'It is a sad and difficult day for our park,' said spokeswoman Karen Varga-Sinka of the park. 'Pinky loved to dance for our guests. Her dances are not learned, but it is natural behavior. They do it to get food from the bottom up. She will be sorely missed. '