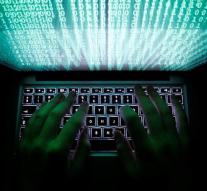 - A 22-year-old man from Maassluis Tuesday arrested for committing cybercrimes. According to police, the man sent thousands of e-mails that were supposedly from, for example PostNL, which he tried to take over people's computers. The case came rolling after a bank filed a complaint against the man.

The mails were asked to click on a certain link, for example to follow a parcel. If that happened, malware on your computer was installed to the Meuse to Luiz could take control of the computer. Police could not say how many victims of the practices of men have become or how much financial damage there.

After the bank had reported to the police launched an investigation and Tuesday followed a raid on the family home of the man. The man is suspected of computer intrusion, fraud and money laundering. He was arraigned shortly.