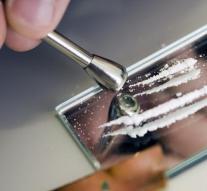 nets - A 20-year-old from Tilburg was arrested Thursday afternoon in Etten-Leur because he is suspected of drug trafficking. The man had dozens of bags of drugs hidden in his underpants.

When the man around a quarter to a red light went on business Vosdonk in Etten-Leur and he was calling while driving, the police decided to put the man on the side.

The audit found two phones and a pile of banknotes. Then hit the driver fled.

In the bushes, he tried to get the drugs out of his pants and dump. An agent saw this happen and insisted the man. The Tilburger was found 37 bags of heroin, 46 bags of cocaine, crack, and a beads 10 so-called pony packs with heroin with them.

The drugs and cash were seized. The man is stuck.