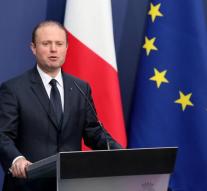 valetta - 'Europe should stop pointing the finger at the people who vote for populist parties, but pay attention to their concerns. We will not avoid debate on migration, and to listen to the concerns of citizens, 'said the Prime Minister of Malta on Wednesday.

The Social Democrat Joseph Muscat said this in the capital Valletta at the official ceremony that his country's six-monthly rotating EU presidency took over Slovakia. It is the first time that the southern European island nation with 415 000 inhabitants the leadership gets on the European Councils of Ministers.

Malta is migration top priority. According Muscat may lack in other EU countries in solidarity with 'engulfed' countries like Greece and Italy be solved if the European external borders The borders between countries as well as sea borders be secured.