Home / World / Malta is picking up 120 migrants off the coast 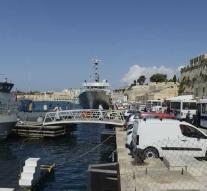 valletta - The Maltese forces have picked up 120 migrants from a boat on the Mediterranean. The refugees in distress were accidentally discovered during a routine check-up off the coast of Malta, let the army of the Mediterranean island know. It is expected that the crew will be brought ashore on Sunday.

Malta has a strict policy regarding the admission of boat migrants. Malta collided several times with Italy this year with the inclusion of ships with migrants. That country also refuses to admit ships from rescue organizations to its ports.