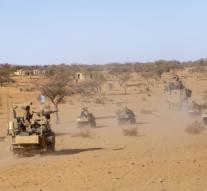 - Malian soldiers on Tuesday in the northern city of Gao opened fire on protesters demonstrating against the government. In addition, be sure cases, two deaths and several wounded. Reported that two doctors at the hospital where the bodies were taken.

The demonstrators were protesting against the establishment of a new transitional authority in the region. Some were armed with knives, said an eyewitness.