Home / World / Mali should take away from Tuareg militia 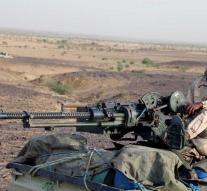 bamako - The Malian government should sever ties with the Tuareg militia which counts as the instigator of the recent tensions in northern Mali. The peace process in northern Mali is different in the proceedings and that Muslim extremists would play into the hands, put the United States.

The Malian government signed last year's peace with the Tuaregs in northern Mali, but the peace agreement is under pressure. The nomads fighting for years for self-government and withdrew in 2012, together with the Muslim extremists who conquered a large part of Mali in a trice. The Gatia militia claims to defend the interests of a specific ethnic group Tuareg, but seems to thwart the protagonists of their own Tuareg state.

The government in Bamako said to have nothing to do with the Gatia fighters. The militia itself confirms nor denies.

The UN mission to Mali to assist in the fight against jihadists also has a number of Dutch blue helmets.