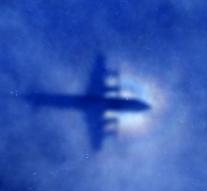 - Malaysia has 45.5 million spent on the search for the missing plane Malaysia Airlines MH370. The aftermath of the crash of flight MH17 from Amsterdam to Kuala Lumpur, the land cost 2.7 million euros. That the Malaysian Ministry of Transport reported Monday.

Flight MH370 disappeared nineteen months ago without a trace during a trip from Kuala Lumpur to Beijing with 239 people aboard. The unit is likely to end up in the southern part of the Indian Ocean.

Flight MH17 was hit in July last year by a missile and crashed in Ukraine, which all 298 passengers died. Among them were 193 Dutch.

According to the Ministry have respectively 236 and 74 relatives of passengers on the flight MH17 MH370 and received compensation totaling 14.8 million euros.