Home / World / Malala is back in birthplace Mingora 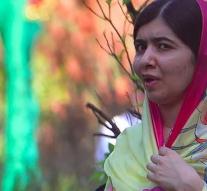 mingora - For the first time since she was shot there by the Taliban, Nobel Laureate Malala Yousafzai is back in her birthplace Mingora in the Swat Valley in Pakistan. That's what a friend from her family and a few security workers told us.

The roads to the house of the 20-year-old Malala have been sealed off. She has been in Pakistan since Thursday.

Malala was shot in her head by the Taliban in October 2012 in a Pakistani school bus. She was a target because she fought for education for girls. The young activist barely survived the attack.

Malala gained worldwide recognition through her struggle for education for all children. In 2014 she received the Nobel Peace Prize.