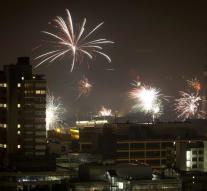 According to a poll commissioned by the journal Internal Administration. It is performed by office I & O Research among nearly 2,500 Dutch. Independent of any fireworks ban takes 60 percent of the Dutch it is a task of the government to regulate a central fireworks show. Support for fireworks-free zones is compared to last year increased slightly, from 76 to 78 percent.