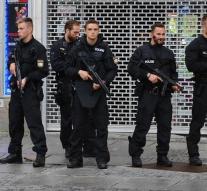 - Germany will take further measures in the fight against terror. As criminal foreigners be deported faster, the same applies to 'troublemakers'. There is a majority for the plan of ruling party CDU. Coalition partner SPD supports, making the package even before the Bundestag elections can be conducted in 2017.

Germany will do everything to reduce the risk of a terrorist attack. Foreign rebel fighters in the Syrian Civil War may lose German nationality, video surveillance is improved, the Weapons Act is amended so that the purchase of weapons is more difficult over the internet. To counter radicalization of refugees, the aid increases they get. Teachers learn to better deal with traumatized people.

The professional doctors will be adjusted. When they hear that a patient has plans for an attack, they should inform the authorities about it.