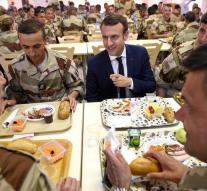 paris - Six out of ten French are happy with Emmanuel Macron as president. This is evidenced by a survey of the French Sunday newspaper Le Journal du Dimanche.

Of the nearly a thousand people over the eighteen years who participated in the interrogation, 62 percent said they were satisfied with Macron's reign. The novel president, who took on May 14th, is therefore more popular than his predecessor François Hollande who scored 61 percent in May 2012 shortly after his appointment.

The new prime minister Edouard Philippe falls well at 55 percent. He is also more popular than his immediate predecessor Bernard Cazeneuve, who had 51 percent happy citizens in December last year.