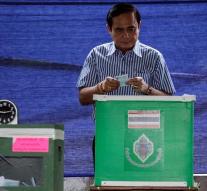 bangkok - The new Thai constitution has received the blessing of the majority of the Thai electorate. In a referendum last weekend voted 61.35 percent for the constitution drafted by the military. The Election Commission made the final result on Wednesday.

The results confirm the convincing victory for Prime Minister Prayuth Chan-ocha since he as army chief in 2014 seized power. The draft constitution was rejected by 38.65 percent of voters. The turnout was just over 59 percent, said the Electoral Commission.

The new constitution was drawn up by the junta pushed aside in 2014. Prime Minister Yingluck Shinawatra. The way is now clear for parliamentary elections next year. The government that comes has to maneuver in which elections within the margins imposed by the army leadership.