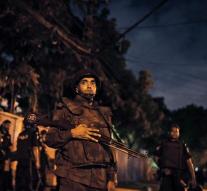 dhaka - Police in Bangladesh on Friday two Islamist extremists killed in a firefight in Dhaka. One of the two was considered the prime suspect in hostage in a cafe in the Bangladeshi capital last July, in which twenty people were slain.

The thirty Nurul Islam Marzan conducted a splinter group of the extremist Jamaat-ul-Mujahideen Bangladesh (JMB). His companion, 35-year-old Saddam Hossain, would have been involved in the killing of a Japanese in 2015 in the north of the country.

Bangladesh has suffered for several years with an increase of Islamist violence. Dozens of critics of radical Muslims were killed in a very bloody way. In the attack on the cafe in July were massacred seventeen foreign visitors. After the attack has slain the Bangladeshi police certainly forty suspected extremists.