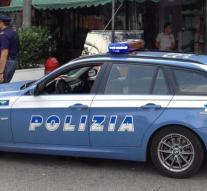 naples - The Italian police during a massive anti-mafia operation in Naples discovered an underground bunker beneath an apparently quiet block. In the heavily guarded rooms drugs were packaged before being sold. There have been arrested a total of 86 mafia members.

The detainees are members of the Puccinelli clan, one of the clans of the Camorra which holds the west of Naples. In the district of Rione Trajano act mafiosi in cocaine, hashish and marijuana. That is, moreover, a family affair, everyone helps. Mafia members also get help from neighborhood boys calling code words from the rooftops to alert the police.

The Camorra, the Neapolitan version of the Mafia. It has no central leadership but is divided into many clans fight each other to some extent. Most of its leaders have been arrested in recent years. Now are mainly young gangsters running, supplying bloody fighting in and around Naples.