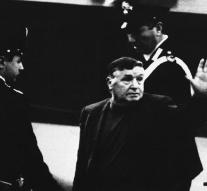 bologna - The infamous mafia boss Salvatore 'Totò' Riina remains detained in the special department 41bis of Parma Hospital where convicted criminals are being nursed. According to the Italian media, the 'tribunal of supervision' in Bologna determined that the 86-year-old former leader of Sicilian Cosa Nostra may not be home or in another care institution.

His lawyers therefore asked for a seriously ill criminal to be entitled to a dignified death. He should therefore get home arrest instead of being detained in the infirmary of an additional secured prison. The judge was of the opinion that Riina could not get any better care anywhere else.