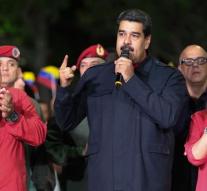 caracas - President Maduro's Socialist Party won the Venezuela regional elections. According to the government-elected constituency, the government party in 17 of the 23 Länder was the strongest. The Venezuelan opposition dispute the outcome and calls for street protests.

Even before the official results were announced, Gerardo Blyde said campaign leader of the main opposition party had 'serious doubts and suspicions' about the results that the electoral council would publish. Based on the polls, the opposition expected a lot of victory. The opposition demands an election audit.

Sunday's regional elections are the first elections in the South American country since the Socialist government of President Nicolás Maduro set off the parliamentary opposition parliament in August. Maduro's party held 20 of the 23 Länder.