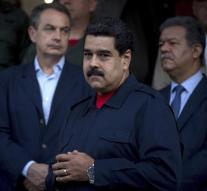 - Venezuelan President Nicolas Maduro Has Monday paid a surprise visit to the Vatican City and talked to the pope. Francis recommended the controversial leader of the impoverished South American country, where almost everything is scarce or completely absent, to conduct an open dialogue to put an end to the deplorable condition.

In a statement, the Vatican called it the privéonderhoud with the Catholic prelate ' took place in the context of the alarming situation in which Venezuela finds the political, economic and social crisis that the entire population severely to the test. '

Francis, from Argentina, urged Maduro to ' brave to choose the path of sincere and constructive dialogue '. The stopover Maduro in Rome, during a tour of oil-producing countries, was not announced in advance.