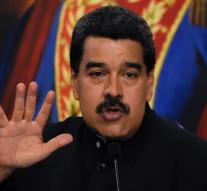 bogota - The government of Maduro has undermined the news supply in Venezuela. The controversial leftist regime decided to remove the Colombian radio and television stations Caracol and RCN. On Thursday morning, the channels on all major cable networks in the capital of Caracas went to black.

Caracol Director Juan Roberto Vargas said the recent announcement of President Nicolás Maduro and the closure of Venezuelan borders played an important role in this decision. The flight of the dismissed Attorney General Luisa Ortega via Aruba to Colombia gave the last move. Vargas called it absurdly that Venezuela thinks that his station was aware of the plans of the apostate Ortega.

Colombian President Juan Manuel Santos sees this press breach as a new blow to the silent democracy in the neighboring country. 'Another example of a government that has nothing to do with freedom. It acts like a dictatorship ''.