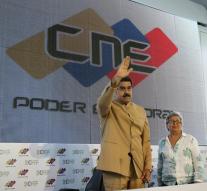 caracas - The Venezuelan President Maduro is not impressed by the sanctions announced by the United States on Monday. In a fierce response, he calls Trump an emperor and says he is not afraid of sanctions. Maduro would be punished by his own criticism of the US.

'If the Emperor's threats and sanctions do not intimidate me, nothing scares me. Put all the sanctions you want, but the Venezuelan people have chosen freedom and I am the president of a free people. '

The US Department of Finance reported Monday that all assets of the socialist leader under US jurisdiction are frozen. American citizens can not do business with Maduro.

US measures are a response to the controversial Venezuelan election of Sunday. 'Illegal election shows that Maduro is a dictator next to the will of the Venezuelan people,' said Minister Steven Mnuchin (Finance) in a statement.