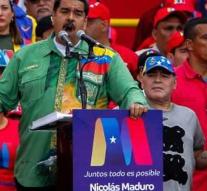 bogota - The Venezuelan president Nicolás Maduro's government gives Venezuelan identification cards to Colombians. Maduro then tries to bring them into Venezuela so they will vote for him during the presidential election of next Sunday, says the Colombian government.

'Through reliable sources, we have taken note of this plan that the Maduro government has been preparing since the end of last year,' stated Colombian President Juan Manuel Santos in a television speech. 'The plan contains details on how, the procedures and payments must guarantee that the voters will come and vote on Maduro. '

The Colombian president gave no further details on the plot, but stressed that it confirmed his decision not to recognize the result of the presidential election. The diplomatic ties between the two countries have been bad for a while.